To the digital twins of its factories, Renault added real-time data capture and playback. Then, a platform for managing all of this information and allowing the creation of different use cases was created.

The automaker is working to digitize all of its processes, from training employees to delivering vehicles to customers and optimizing design and manufacturing processes. After a few years of focusing on data structuring, the manufacturer was able to scale up with the internal creation of a platform based on a single data standard. Back on the digital transformation of the French manufacturer.

An internal solution marketed by Atos

Over this period of data collection, the car manufacturer explains that it did not find a data management and visualization solution corresponding to its request since most of the offers only concerned certain segments. But Renault was looking for complete visibility, hence the internal development of this platform.

The data collected began to be exploited while the IDM4.0 platform was set up between 2021 and 2022 as well as the “central tower” offering a centralized view of all the information. Over this period, 390 million euros have been invested by the manufacturer. An employee explains that Renault then went “from a static digital twin to a real-time projection and interaction capability”. At the same time, it also approached Atos to monetize its industrial know-how. The solution has been marketed since June 2022 under the name ID@Scale. Atos claims to be in advanced discussions with 5 clients and to have signed the first client in the manufacturing industry.

The IDM4.0 platform brings together four dimensions deemed essential: the connection of teams and machines, the digital twins of facilities and the supply chain, the connection to the ecosystem beyond factory walls, the technological dimension that comes ‘integrate above the data.

The connection of teams and machines

In terms of figures, Renault specifies: 8,500 pieces of equipment are connected in the factories, 600 pieces of equipment distributed in around twenty factories are equipped with vibration sensors, around sixty industrial processes are modeled (screwing, machining, welding, stamping, filling, etc. ), there are 4400 Digital Work Stations (DWS) or connected employees. The whole allowing to collect a billion sets of data per day.

For example, on the Maubeuge site, it is possible to view all the objects concerning the Kangoo manufacturing flow: from the screwdriver to the operator on duty. The people present on the production lines are connected operators: at the start of their shift, they must confirm that they are indeed present, that they recover the station in good condition, that all the tools are there, etc. In the event of a problem, the information is sent directly to the senior operator who receives an alert and can solve the problem. In parallel, the team leader receives the same alert which turns green when the problem is solved. “Renault has 4,000 tablets and 3,000 connected team leaders”slips an employee. 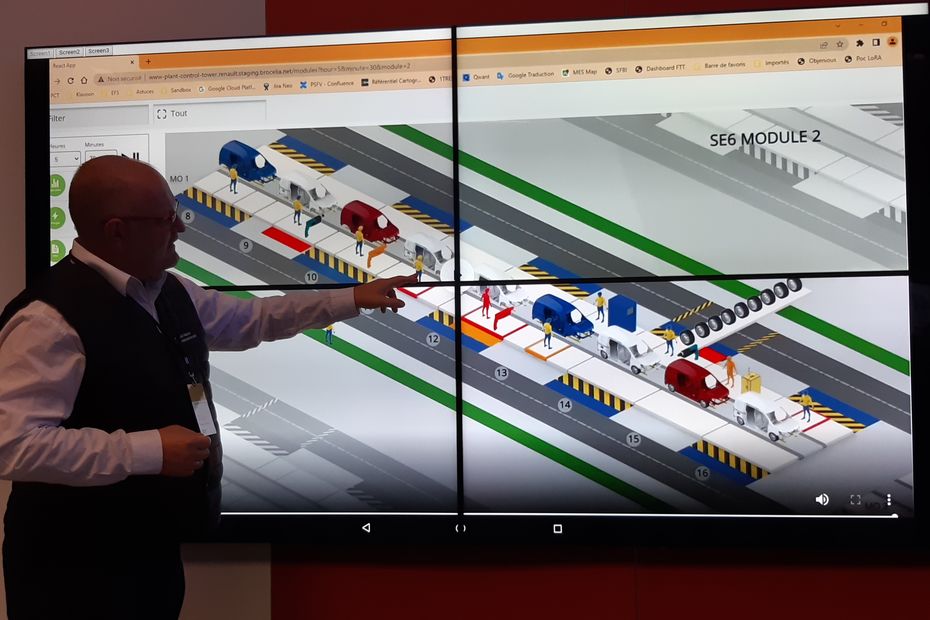 An entire production line from Maubeuge is visible.

Beyond the augmented employees, the robots are covered with sensors and send back a lot of data – more than 70% of industrial equipment is connected – which makes it possible to detect many problems. For example, it is possible to know when an electrode of a welding robot is going to stick. This is due to a misalignment of the robot which is easily remedied without having to suffer a stoppage of the production line.

The contribution of digital twins

Renault has not only made digital twins of its factories, but also of its supply chain. Avatars represent each object and the different flows of goods can be analysed. From these digital twins, the manufacturer has also been able to develop around fifteen virtual reality training courses, including one for the painting of the Mégane E-Tech. The manufacturer relied on the 3D model developed internally.

With this training, the personnel dedicated to painting can train to have the right gesture to optimize the consumption of paint while painting at best. Once the painting module is finished, the software returns to signal when there is too much or too little paint on the body. Renault ensures that people have been trained four times faster thanks to virtual reality. “The manufacturer has at least two virtual reality headsets on its 35 sites”says a virtual reality training manager. “Renault has trained 70% of its painters in France with this system”she adds. 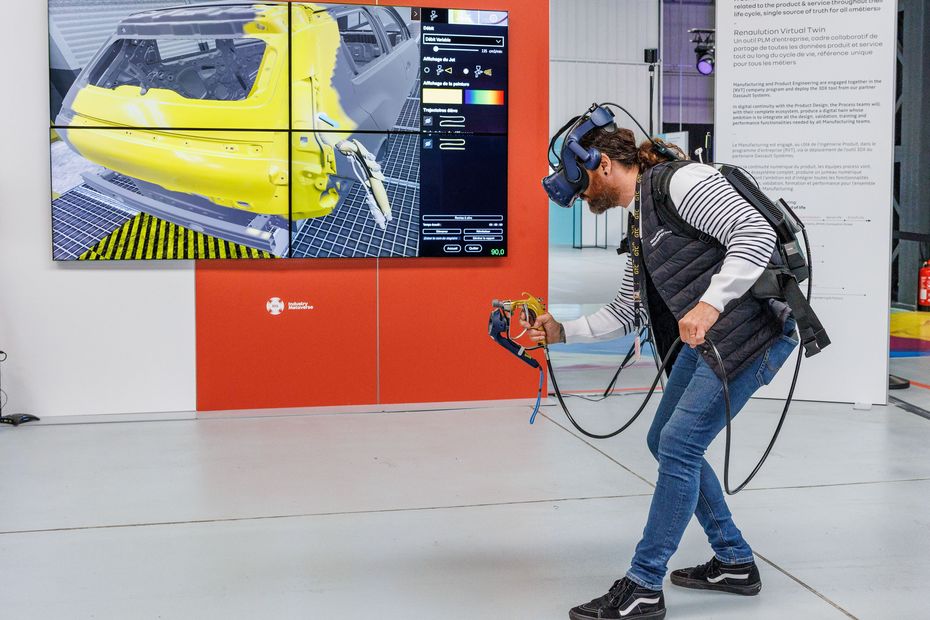 It is possible to practice painting in virtual reality.

Digital twins and virtual reality tools are also used to study how best to arrange production areas, validate the ergonomic conditions of each workstation and ensure that all tasks can be carried out as well as possible.

Connection to the ecosystem outside the plant

With its IDM4.0 platform, the manufacturer retrieves and collects information well beyond its own factories. On the supply chain side, the objective is to plan production as well as possible to maximize margins. For this, it is necessary to automate the recovery of data from suppliers as well as that concerning the transport of goods.

When there is a supply problem, it is immediately reported in order to review the production plan. Crisis scenarios are proposed and the operator can make the final decision. Renault says it wants to continue to develop algorithms to improve and deepen the tools for predictions and prescriptions on these subjects. Along these lines, one of the objectives is to optimize the routes taken by the trucks as well as their filling rate, which would make it possible to reduce stocks.

The fourth element put forward by Renault about its platform is the technological dimension which is positioned above the data. “Artificial intelligence and machine learning models can further enhance the capabilities of the platform”, says an employee. At this level, the manufacturer seeks to take advantage of the cloud and works with Google on certain subjects.

Renault says its platform facilitates the deployment of artificial intelligence models. For example, operators are helped by an artificial intelligence system to carry out visual checks on tyres: “the system proposes, predicts or alerts and the operator decides”, summarizes an employee. The software, developed in partnership with the start-up Buawei, detects anomalies on tires using images. Whether it is a tire in poor condition or mounted on the wrong side, a screw conformity problem or the fact that two different tires have been fixed, the software alerts you to the problem detected.

Once a solution of this type is developed on a site, it is shared by the manufacturer in a library of algorithms so that it can be taken up by other factories.

Thanks to this IDM4.0 platform, Renault wants to reduce its costs, have more visibility, improve prevention and anticipation, reduce the time between orders and delivery, etc. To date, he assures that this platform has enabled him to save 80 million euros in particular thanks in particular to 300 vibration alerts preventing him from stopping production, improving the quality of spot welding, the visual inspection of the chassis or the follow-up of vehicles from the prototype to the series. But he hopes to save up to 320 million euros in savings by 2025. In the meantime, Atos is seeking to market this solution. Could the success claimed by Renault be reproduced by other manufacturers?

Renault digitizes all of its processes, from training to vehicle delivery


Visit our social media profiles along with other related pageshttps://www.ai-magazine.com/related-pages/